by Gregory DiPippo
for publication on the New Liturgical Movement

Part 2: Some Further Observations on the Medieval Office

Apart from the readings of Matins, which will be discussed in detail in the following article, the most variable part of the Office is the corpus of antiphons which are sung with the psalms of the various hours. At the minor hours (Prime, Terce, Sext, None and Compline), the psalms are all sung under a single antiphon. In the office of Sunday and on feast days, the psalms of Matins are sung with nine antiphons, and on ferias, with six, two psalms per antiphon. At Lauds and Vespers, each psalm usually has its own antiphon, but Lauds of Sunday often has only three. On feast days, the antiphons of Lauds are often said also at the minor hours and Vespers; but some feasts have one set of antiphons for Vespers, and another for Lauds, while a few, such as Christmas, have one set of antiphons for first Vespers, another for Lauds, and yet another for second Vespers.

The antiphons vary greatly from season to season and feast to feast, and their texts come from many different sources, both Biblical and non-Biblical. Many derive from the psalm or psalms with which they are sung at a particular hour, or from the life of a Saint; many others are ‘ecclesiastical compositions’, such this antiphon from the Office of the Assumption: “Assumpta est Maria in caelum: gaudent Angeli, laudantes benedicunt Dominum.” (Mary has been taken up into heaven; the Angels rejoice, with praise they bless the Lord.) In Eastertide, the psalms of each nocturn are usually sung with only one antiphon, the exceptions being Easter itself, the Ascension and Pentecost, with their octaves.

In the Middle Ages, the Divine Office was everywhere supplemented by a series of other prayers, which were regarded as no less a part of it than the principal office, (also called ‘canonical’ office.) The oldest of these is the Office of the Dead, which had only three of the hours; Vespers of the Dead was said after the canonical Vespers, Matins and Lauds after the canonical Lauds. The great devotion to the Virgin Mary which was so universally present in the Middle Ages also lead to the creation of a daily Office in Her honor, now generally called the Little Office of the Virgin Mary. It has each of the eight (or seven, if you prefer) hours, but the material chosen for them renders it altogether much shorter than the main office; in most breviaries, it varies very little or not at all from day to day or season to season. These offices were accompanied, at least in theory, by a daily votive Mass in honor of Our Lady in a special chapel dedicated to Her within the greater churches, and at least one daily Requiem in a chapel dedicated to the Cross. In addition to these, the seven Penitential Psalms, the Litany of the Saints, and the fifteen Gradual Psalms (for the benefactors of the Church, local and universal) were also appointed to be said at regular times.

Outside of Advent and Lent, the feasts of Saints were very frequently allowed to displace the Office and Mass of Sunday, and likewise, most feasts took precedence over most ferias. There was also a notable tendency to increase the number of octaves; apart from those which form part of the Temporal cycle, the Nativity of St. John the Baptist, Ss. Peter and Paul, the Visitation, S. Laurence, the Assumption and Nativity of the Virgin Mary, and the feast of All Saints were generally kept with octaves. Most local churches and religious orders kept the feasts of their patrons and canonized Saints with octaves as well; the Franciscans added six octaves to those kept by the Church of Rome, the Dominicans added five.

For many decades, it has been fashionable among liturgists to attribute the medieval preference for the offices of saints and octaves to the fact that they were much shorter than the office of the Sunday or feria, as well as the fact that the supplementary offices (the Office of the Dead, the Little Office of the Virgin Mary, etc.) were omitted on many feast days. While there is certainly some truth to this, such an explanation does not take sufficient account of the importance of devotion to the Saints in the life of the medieval Church. The French art historian Émile Mâle writes (in a chapter of The Gothic Image which can only suffer from the necessities of abbreviation),

“The people never wearied of seeing their protectors and friends… (nor) of hearing them spoken of, and famous miracles and illustrious examples from the lives of the saints were commemorated in poems in the vernacular, in popular drama and in sermons. The Church was the faithful depository of almost all this endless history. Each cathedral or monastery kept the Acts of the saints of the diocese, and solemnly read them on their festivals, … For centuries the saints lived in the memory of the Church through the lectionary.” (The Gothic Image – Religious Art in France of the Thirteenth century, p. 272, Harper 1958)

The ‘lectionary’ of which he speaks here is the corpus of readings from the lives of the Saints for Matins. If the overly busy and the less devout were content to recite a shorter office in honor of a Saint, rather than the longer office of Sunday or a feria, we may trust that in due course, the Saints thus honored interceded for their deficiencies; but it is quite unjust to our ancestors in the Faith to attribute to them all such a simple and unworthy motive for their manner of keeping the Divine Office. 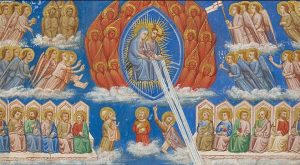